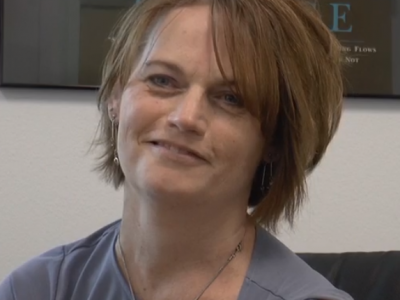 Denise, age 51, was diagnosed with Stage II breast cancer at the age of 47. Because her aunt had breast cancer in her 70s, insurance paid for genetic testing. But the results came back as a question mark, so insurance would cover only a single mastectomy. Denise also had chemotherapy, radiation and immunotherapy, and takes tamoxifen. A large benign tumor impeding her breathing was discovered and removed during her cancer treatment.

Denise is a White woman who lives with her husband and four dogs in a rural area in the Midwest.

About four years ago, Denise was diagnosed with Stage II cancer in her right breast. A day later, she learned she would need a mastectomy, chemotherapy and radiation. Taking so much in so fast was like a “complete merry go round ride.” Meanwhile, her genetic test results came back with a question mark. Noting that some health plans let women choose whether to have a single or double mastectomy, she says her insurance gave her no choice. It would only cover a double mastectomy (or an oophorectomy) had she tested positive for a breast cancer genetic mutation. She had a single mastectomy without reconstruction, eight rounds of chemotherapy over the course of four months, radiation which was like a walk in the park compared to chemotherapy, and immunotherapy. She is taking tamoxifen to tamp down her “girl hormones.”

While placing the chemotherapy port in the left side of her chest they discovered a schwannoma (benign tumor). This cantaloupe-size tumor pushed on her lung and cut off blood flow in her arm. It was removed at a nationally recognized clinic that also focused on her spirituality. So according to Denise, cancer saved her life. But the surgery created scar tissue on her remaining breast, and her insurance refused again to remove her left breast, citing no evidence that schwannomas increase breast cancer risk. Nonetheless, Denise worries about a recurrence. And the asymmetry (along with hair loss) was a hit to her femininity. A prosthetic has helped her self-image.

Denise is grateful for her husband’s health plan. But in her rural area, she had different procedures at different clinics—and things fell through the cracks. So, she had to become her own health care advocate. She orchestrated (and nagged) people at one clinic to fax her x-rays to the other clinic. She notes it's sad that health care is run like a business. For all the people she encountered in her care, she found so little personal connection. She was relieved of her “middle person” role when she somehow found a wonderful nurse navigator who could move information and straighten out complicated billing statements.

Denise coped over that first year by going “on a mission of crazy.” She worked very hard at her job even through treatments. She completely repainted and reorganized her home. At some point, a kind nurse had a “come to Jesus talk” with Denise. It was time to move out of “survival mode,” slow down and smell the flowers. That’s the first time Denise broke down and cried for her losses. She counts her blessings too. Her husband, two grown sons, co-workers, and friends have been so supportive. At work, she got time off as needed, a car and gas money to drive to her daily radiation treatments. Finally, cancer brought her back to church and closer to God.

Don't assume nothing. They assume that somebody already had a conversation about prosthetics. No. No one. I mean, they-- generic information. I had to go digging and figuring out stuff myself. You know, don't assume that. It's sad. And I told the people at the Cancer Center. I said, “God help anyone who walks in here with breast cancer.”
And this was not the kind of main artery. Was this at a small clinic? A small…
This was the bigger clinic where they specialize. And they had a navigator nurse, and they said, “well, we didn't tell you about that because she wasn't here that day.” I said, “what a bad excuse.” I said, “have you guys ever heard of business cards?” I said, “because you could've given me her business card.” I was upset. There’s no excuse for that. There's none. And if you're taking in that much money, I'm entitled to the best of the best. You know, and I’m not, I mean, that’s a lot of money you got to throw at that, at the health care system. There's got to be a better way, truly.

Denise says religious faith can be one way to cope with genetic fears.

Denise says religious faith can be one way to cope with genetic fears.

It’s not the end all. It's just not. It's just the beginning, and to definitely have those conversations with God, and give him your fears. But also allowing for that quiet time to let him talk to you. You know, it was always like, you think you need an answer, but just to be quiet and take in the quiet moments and let go of fear. Fear is the devil by far. Nothing to fear. Just keep moving forward.