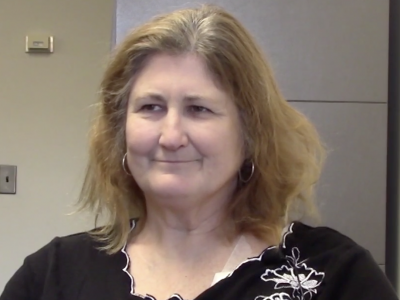 Lainey, age 54, is a four-time cancer survivor who found out that she was positive for a mutation on her BRCA2 gene after her most recent diagnosis of mesothelioma. Lainey got her first cancer diagnosis at age 31. She went through surgery, radiation and chemotherapy for her breast cancer.

Lainey is a White, married woman with two grown daughters. She works as an account rep in a corporate office. She lives in a rural area of the mid-Atlantic region.

Lainey is a “cancer fighter” who has dealt with 4 different bouts of cancer over the past 20 or so years. Her first diagnosis at 31 was with lymphoma, when her daughter was just 6 months old. She was diagnosed with breast cancer about 8 years later, and then endometrial cancer, and she is currently in a clinical trial for mesothelioma. When she had breast cancer, she had a bilateral mastectomy, chemotherapy and reconstruction – eight surgeries in two years. She got through breast cancer, and other health issues, by focusing on her desire to see her daughters grow up and a desire to live a full life – she “has her daughters to live for.” Lainey feels that regular mammograms saved her life, and is strengthened by laughter, a strong support system, and a belief in the power of prayer.

Lainey found out about being positive for a BRCA2 gene mutation only recently, as a by-product of her clinical trial participation. An earlier request for genetic testing had been denied by her insurance company. Lainey doesn’t really know how her BRCA status might have impacted her cancer diagnoses, and she had always attributed her breast cancer to the radiation received for her lymphoma. “Where genetics fits in there, I am not quite sure.” Although her genetic testing has not impacted her treatment, she is grateful that it has allowed her to have conversations with her daughters about genetic testing as an option for them, and the importance of early and regular screening. Her hope is that information gained from her testing and trial involvement will be able to help others – this gives her a strong sense of purpose to her life. If anything that she has gone through can contribute to saving another’s life then her experiences have been worth it.

When she had breast cancer, Lainey chose to have a double mastectomy because she felt that it was more troubling to live with one breast than none. She found reconstruction to be very painful and limiting for some time. Lainey has dealt with her various cancer experiences head-on, with a pragmatic and goal-oriented approach. Her philosophy is “if life gives you lemons, stick them in your bra.” She has sought to be as open with her daughters as possible, even when they were young. With her recent diagnosis, she found it difficult to tell her loved ones initially, because the prognosis was difficult, and she knew that they would be very sad.

She has felt very supported, however, since finding the right time to share her news. The support of her workplace has allowed her to remain working, which has been important to her. She struggles with the idea that for her, being sick is normal. She sees her long history with cancer as time that she has been able to spend with her loved ones, and living a good life. She wants providers to carefully consider how to give people information in ways that they can understand it – particularly at times when “their minds have just been blown,” and to remember that information, and people’s needs change over time.

Lainey used her dogs as a sounding board when she wanted to say things out loud that she worried might upset humans.

Lainey used her dogs as a sounding board when she wanted to say things out loud that she worried might upset humans.

Sometimes you just want to talk it out. And you can talk to a pet, and they don't care. You know? They'll be there. And you might not want to voice things to your spouse or to your children. Or if your parents [INAUDIBLE]. You know? You just sometimes you just need to talk and vent. And a dog is great because they will love you. And sometimes you don't want to hear other people's opinions or other people's thoughts on what you should do, or pity or any of that. You just need to get it out. And that's why pets are absolutely wonderful.

Lainey is involved in a clinical trial.

Lainey is involved in a clinical trial.

And I'm involved in a clinical study to confirm a drug that they're trying to get FDA approved for Mesothelioma. It is approved for lung cancer. But they're trying to get it approved for Mesothelioma. And like I said, if I can help someone else further down the road, that's fantastic.
---
And there might be another study involved. You know and just-- I want to do what I can to gather information to help others. Kind of feel like it's my purpose in life. You know? Because, you know, because, I've always kind of floundered. Going, “I don't really have a purpose in life. I'm here. But I want to do something.” So this, to me, is hopefully doing something to help someone else.