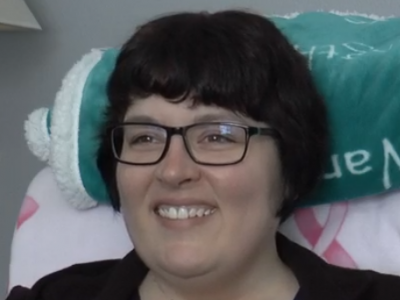 Ovarian and breast cancers as well as BRCA gene mutations run in Peggy’s family. Peggy, age 36, was diagnosed with Stage II breast cancer, tested positive for a mutation on her BRCA1 gene, and then learned her cancer had progressed to Stage IV. With hopes for survival at the forefront, she pushed for and got a referral to an academic comprehensive cancer center in a different city. She opted for aggressive treatment, which initially included chemotherapy, radiation, oophorectomy and left mastectomy. Plans for the right mastectomy and reconstruction were thwarted with a Stage IV diagnosis, now being managed with medication. Friends, family and co-workers, and a sense of adventure have helped Peggy to embrace life and maintain hope as she grapples with fear and uncertainty.

Peggy is a 36-year old White woman who lives alone in a Midwestern rural community.

Breast and ovarian cancers and BRCA gene mutations run in Peggy’s family. She assumed that “30 years down the road” she might get cancer. Then Peggy found a painful lump in her left breast. She thought breast cancer doesn’t hurt and “blew it off.” At her mother’s insistence, Peggy went to her local doctor, who said cancer was unlikely but ordered a mammogram and an ultrasound. A few days later, the radiologist at the local cancer clinic told her she had cancer. “No, it can't be,” Peggy recalls, “it's all on my dad's side.” The biopsy indicated Stage II cancer. It was not welcome or expected news! Peggy pushed for a referral to the comprehensive academic cancer center about an hour and a half drive from home. She tested positive for a mutation on her BRCA1 gene and sent a letter to her close relatives. According to Peggy, knowing your risk can be helpful, but sometimes she’d be “better off not knowing.”

Given her high risk and young age, Peggy had aggressive treatment. She started with chemotherapy infusions, had radiation and rounds of oral chemotherapy, and then surgery. She had wanted a bilateral mastectomy and reconstruction, but with risks for infection, she had a left mastectomy and oophorectomy with plans for the right mastectomy and reconstruction. But within a few months, with cancer advancing to Stage IV, Peggy decided against those planned procedures. Knowing there’s no cure, she takes medication to keep it from spreading—and knows there are a couple of medications to try if this one fails. She is thankful that her workplace insurance covered genetic testing, cancer screenings and treatment. But cancer has been a financial setback. She had assumed she had plenty time to buy cancer and short-term disability insurance. Those options are now closed off. And with her deductibles, she has not been able to save. But she is blessed. Her friends put on a benefit to help pay her deductibles for the next few years. Her family and co-workers have supported her in emotional and practical ways. But, fiercely independent, Peggy finds it hard to accept help.

At the age of 36, Peggy, faces a tension between living her normal life and planning for the possibility that cancer will return and shorten her life. On the one hand, she feels remarkably well. She has no medication side effects; her hair has grown back. She focuses on living as best she can, with work, visiting friends and family, extensive home remodeling projects, travel plans, and being an awesome aunt to her young nephews. On the other hand, Peggy, an avowed planner, finds that living with an uncertain and possibly curtailed “how long” a little “freaky.” If she has 10 more years, she’d only be in her 40s. Cancer she says changes her “life plan.” And she is frustrated that her family and friends don’t want to listen to these fears. She notes when she wants to talk, they say, “You'll be an old lady when you die.” Peggy understands her friends’ reluctance to go there, but when they talk about retirement, she feels isolated, “like, I might not make it to retirement.” But with a hope for a cure or a miracle, she is still paying into her retirement accounts.

Peggy wants to dispel some myths that could get in the way of early diagnosis and treatment. “They say, … cancer doesn't hurt, but it can” and “they always say if it's on your dad's side you should be OK, because it carries through your mom's side. … that's not true.” In fact, young people do get breast cancer so if you find a lump, get it checked! And to friends, family and cancers, she would want them to listen and to acknowledge that fears are normal.

Peggy based her choice on her doctors’ advice, her family experiences, and her own priorities.

Peggy based her choice on her doctors’ advice, her family experiences, and her own priorities.

The doctors meet and they tell me what their game plan is. And I'm probably going to go with
their advice, because I don't know a lot with medicine, and I'll do whatever I have
to do to survive. And I'll do so I don’t-- so I can live life more.
---
So I'm going to do the right mastectomy, and I've already had my ovaries and tubes removed,
because of the ovarian cancer risk. And then my grandma has ovarian cancer, so I wanted to be
proactive and try to limit myself, so I don't get another bout of cancer later on in life, which I feel
like I might because I'm young and I've already had it once, and I'm probably more susceptible to
get another form, later in life.

To Peggy, listening is the most important thing.

To Peggy, listening is the most important thing.

Listen to what they have to say. Listen to the questions that they have. I mean, the doctor only wanted to write me a prescription for lorazepam, and I'm like, no, I don't need that. Like, space that they just listen. And ask them how they feel about it. Ask them if they have any questions. Ask them what they want to do. You know, just listen, I think is the big deal.