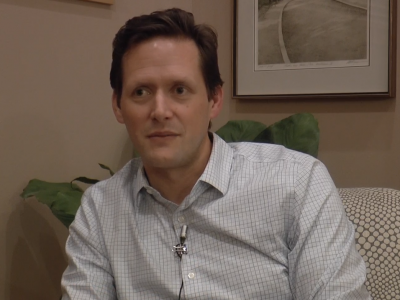 Matthew, age 44, has a strong family history of colon cancer. At the age of 21, he was diagnosed and had part of his colon removed and six months of preventative chemotherapy. With annual screenings he has been cancer-free for 20-plus years. He tested positive for Lynch syndrome about four years ago.

Matthew is a White man who lives in a rural area in the Midwest with his wife and two teenagers.

Matthew grew up with a keen awareness of his family’s colon cancer history. People in his parent’s and his grandparent’s generations were diagnosed with it, and some died. Matthew, the first of his generation, was diagnosed at age 21 in his junior year of college. With the attitude of “let's go through the steps and move on to the next thing,” he had part of his colon removed and then six months of preventative chemotherapy – and he graduated from college on time. More than 20 annual scopes and other screening tests have shown no problems. Matthew says maybe he will stay lucky but accepts that at some point there will probably be a recurrence or another cancer. He does not live with fear of cancer, because as a Christian, he has “faith in something bigger.”

Matthew’s college sweetheart stuck by him through his cancer diagnosis and treatment. Of losing his intestines, he half-jokingly says, “all the blood flows to my heart.” On a more serious note, Matthew notes that his cancer accelerated, matured and deepened their relationship. They married soon after college and established their careers. Matthew acknowledges that his need for continuous health insurance precluded a more entrepreneurial career path. The couple now has two teenagers. For their sake, Matthew was tested and learned he has Lynch syndrome about four years ago.

With cancer diagnoses arriving at a younger age in each generation, Matthew and his wife have engaged their children in conversations about the family risk, the importance of colon cancer screening and the pros and cons of genetic testing for Lynch. Conversations about inherited cancer risk are “tough,” Matthew says. But they have also been a chance to model that as a 20-plus year cancer survivor the situation as not a “big negative.” With a twist of humor, the family created colonoscopy coloring book, which Matthew has since shared with his doctor and friends who dread their upcoming procedure.

Matthew’s close family ties and faith community provide deep connection and support. He has had excellent genetic counseling and health care at an academic health care system and appreciates that his gastroenterologist is very focused on Lynch syndrome research. As a “man of faith,” Matthew sees science as “peeling back God's creation.” He thinks it would be awesome to develop treatments that can prevent or repair genetic mutations, so his kids and their kids don't have to deal with it.

Matthew has gone more than 20 years without a recurrence but believes “chances are” he will have one eventually.

Matthew has gone more than 20 years without a recurrence but believes “chances are” he will have one eventually.

But I think in terms of an understanding of genetics, and the impact, and the part it plays, and the odds, you know, I think we had a pretty high understanding of what that meant, in terms of, your risk is x percent, whereas the general population is y. So we had a pretty good understanding of that. And also, I think just understanding beyond colon cancer, which is the primary Lynch syndrome risk, that there's a risk for other cancers.
---
I’m lucky that I think I've gone 20 plus years and not had some level of recurrence. Now, it may just be the benefit of great healthcare, and the fact that I get screened on a regular basis, and perhaps lifestyle choices of eating healthy, and, you know, taking care of my body in some way. But there is an aspect of, this clock isn't going to run out forever. At some point, time's going to be up and there's going to be something that’s going to come up, whether that's another colon cancer occurrence, some other type of cancer. I don't know. But the likelihood of that, I think it just was cementing the reality that there probably is going to be something that comes up along the way. When is that going to happen? You know, it's not indefinite. Maybe I'll be lucky and it never will. But, chances are, it will.

As a young man, Matthew also opted for major surgery.

As a young man, Matthew also opted for major surgery.

So, they found a tumor in the, part of my, the transverse part of my colon. And you know, I went through that diagnosis, met with the surgeon. And decided, OK, we're going to do surgery. My view at that point was, yep, get it out. Take the cancer out. Take as much of the colon out as you can to reduce the risk of future recurrence. And so I think it was within a week, scheduled to have surgery, which was at the end of my junior year of college. So I had the subtotal colectomy, which removed all but about eight inches of my colon, and then went through a course of six months of chemotherapy through that summer and fall. And, yeah, so that was my initial experience, personally, with hereditary colon cancer.
---
What was it like to be getting cancer so young? Were you in college, or? I just, wow.

I was. It was end of my junior year of college. So, yeah, I think there was youthful naivete, of just, an “I'm invincible” kind of that mentality. Not so much that I was invincible, because, I mean, I didn't believe that. But just, I attacked it. It was, this is what it is. And I'm a very logical person. So it was, OK, here's the diagnosis. Here's the treatment. Let's do that. Let's go through the steps, and move on to the next thing. So it was the end of my junior year. I had surgery the week of my finals. So I missed finals that week. I had to figure out how to make those up. I had an internship scheduled that summer in [LOCATION], where I was in school. And so I arranged to have my chemotherapy done in [LOCATION], so I could start my chemo there while I was doing an internship over the summer, and then continuing my fall and senior, or fall semester my senior year of college. So I just went through it, just did it. And never really, I don't know if I really processed it, or thought about kind of what it was to be going through that at the time. You know, I think it's hit me at different stages in life, as I've grown older and more mature. But I think it was just like, yeah, it is what it is, and move on.

And then as we came here, got connected in with a physician who happens to focus his area of expertise and research on Lynch syndrome, in particular. And he's been a fantastic gastroenterologist. So I feel really fortunate in the community that we are, and having a medical committee that we have to lean into. And then, you know, with the genetic screening, to have genetic counselors who can meet with you, and talk through all that, and complete those tests. I mean, it’s been really fantastic.

Matthew remembers having to confront future risks when he was still very young.

Matthew remembers having to confront future risks when he was still very young.

My wife was, we were together at the point in time that we went through this, so then it’s, are you comfortable-- and my dad actually gave my now wife an out. He's like, “You sure you want to marry this guy? Because there's a good chance your kids could have this.” You know, so having those conversations at 21 or 22, you know, are pretty significant life conversations to have.

How has that genetic risk, and the cancer itself, affected your outlook on life?
Yeah. You know, we kind of talked about insurance. So I'm an accountant. I'm kind of conservative. So I think, in terms of career opportunities, I've probably taken less risks in certain areas. I haven't been maybe entrepreneurial, or sought out, you know, self-employment types of things, because of the value and the priority of having insurance, and knowing the importance and significance of that. [um] So I think that's probably played a part in some of, some decisions that I've made.
---
But I think it helps me balance having a uber-successful career, or being super driven. I balance that with, it's more important to spend time with my wife and my family than do all those things. So I think, just in terms of perspective, it's probably brought perspective, you know, in that sense.

I've grown up in the Christian faith, grew up in the church, and have carried that throughout my life. You know, didn't always follow it, and live it out, I think in my day to day. You know, certainly, as I, you know, high school years, and college years, certainly straight away. But, in particular, going into my diagnosis, felt that significance, and kind of the power of prayer, and just, you know, faith, and trust, and not worrying about kind of the outcome. There's not a fear. Right, there's not a fear around a diagnosis when you have a faith in something bigger.
Yeah. And so the faith strengthened, or you came back to it? How did the diagnosis?
That reignited, yeah, a bit. I don't think it was ever gone. It was always there. Some of my life decisions were probably incongruous with my faith and my core values. So I think that reignited, and kind of re-instilled, you know, what I held dear.

Matthew says his church community supported him in many ways.

Matthew says his church community supported him in many ways.

We also have a great community here where we live. You know, just people rally, whether it's faith community or not, regardless, it's an outstanding community. So, you know, as my wife's mother, my mother-in-law, was going through cancer, and, you know, eventually died from that. She passed away five years ago. And just having a community of support, you know, having people to help with kids, help with transportation needs, help with meal needs, you know, just all these different things. That, you know, she could be with her mom, supporting her mom, and doing all that. But then there's another community that comes around. So I think that’s key. And then I think just, in the faith community, having prayer support, and everything else that comes along with that, is always key of having that.

Matthew says that if you have a lot of cancer in your family, it may not be a fluke so you should get genetic testing.

Matthew says that if you have a lot of cancer in your family, it may not be a fluke so you should get genetic testing.

I don't know if we were talking about genetic testing at that point in time. But just the whole knowledge is power of, you know, make sure you get, if you've got a family history, if you've had multiple family diagnoses under age of 40, there's a really high, that's not environmental. That's not some fluke. There's a family history of some sort. You need to make sure that you're getting screened on a regular basis, and making sure that she's doing that for her family members, and children, and everything else, and looking at that. So just had that conversation around, encouragement, and the whole idea that having the knowledge of that family history is powerful. And that it allows us to seek out the appropriate screening protocols.