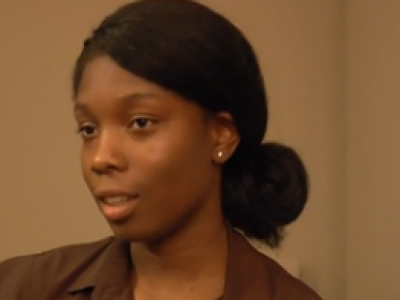 Tia, 28, was shy and embarrassed about having no father. She masks her depression and refused a formal diagnosis. She stopped self-medicating, and does art to heal her depression. Work and relationships remain challenging.

Tia works as a patient advocate. She is single and lives alone in an apartment. She is African American.

Reflecting on her childhood, Tia thinks she “could have been slightly depressed”. She describes herself then and even now as “quiet or some would say maybe withdrawn”, and “very nervous” in social situations. She says that much of this stems “from not having a father figure. …I guess you could say not having love from a man made me question my entire existence” and “insecure about everything.” In middle school, “people would talk about, oh my dad ‘this and that’. I would kinda make up stories sometimes” so she did not feel “even more like an outcast”. Tia describes additional feelings of loss, “you wanna father for like prom or parent teacher conference or just simple things like first heart break”. When “I get married or engaged, who would walk me down the aisle”? To this day she says these “insecurities about myself affect the relationships I do have’ and explain “the reason why I’m not in one”. Protective of her mother, Tia has never asked about her father, “I know it wasn’t her fault. …I just imagine that she felt maybe ten times ...the hurt that I was feeling”. Friendships for Tia have been complicated and a source of sorrow. She feels “people may prey on that weakness of mine” and as a result, “I isolated myself for a very, very long time”.

Tia’s said two doctors diagnosed her depression, and both offered “some sort of medication” and information about counseling, which she refused. “I was a little shocked and surprised that a stranger would know. … I didn’t tell him anything that I was going through.” A second doctor, also a “regular physician”, likewise recognized her depression, which she thought was “kinda weird that a stranger would recognize without me even saying much”. Yeah, I answered all questions that they had. I was in good health so I felt that it was kind of, kind of impressive. Cause it’s something I hide”.

While acknowledging that, “the whole idea or feeling towards depression actually needs to change”, Tia is sensitive to the fact that “depression is frowned on in the African American community”. Thus she has not reached out to anyone. Many of Tia’s friends rely on her advice and support, because, she thinks, “I am a good listener”. She says she took pride in being able to help people and thinks say it “raises my self-esteem”. But now, she notes, “I have never been in a situation where anyone cared, but I was always the one that people run to for advice”. With all her recent, “mid-life crises” of “deciding about my career”, and a devastating relationship break up, Tia says, “You would think that people would sincerely ask and continue to check up on you to see how you’re doing”. She hopes “someone would ask and maybe I would tell”. Tia thinks they might assume that she is “okay since I give advice”, but she wonders why people nobody asks, “How does she know so much?”

Tia is not “a fan of medication” because at one time she used increasing doses of prescription drugs and alcohol to self-medicate, until she realized where that would take her. She later became obsessed with sugar. She redirected these negative things into “something that’s positive and beneficial as well and comforting”. She started painting, which she says is “expressive without saying much” and makes her feel relaxed and calm,  “I feel gratification when it’s done” especially when “others say ‘oh, that’s cool’ …or ‘oh you did that?’” Tia dreams of inventing a phone app that would be “a friend in your pocket and you can just talk, say whatever you want to say” and you could have it respond with inspirational quotes or even nothing”. The idea is “just to get it off your chest”.

Tia describes how she became addicted to prescription medication that made her feel balanced.

Tia describes how she became addicted to prescription medication that made her feel balanced.

I don’t remember exactly what but it started off, I think, like a Tylenol 3? Had hydrocodone, codeine, vicodin .. it kind of just like went from Tylenol 3 and then after a while, it’s like, this isn’t working and I don’t have that feeling, that like comfort, like mellow like, balanced feeling that I’m used to having. And it just went from taking them, like, for menstrual cramps and just like, “Oh, I want to feel like this all the time.” And then just keep taking them and then keep upping the dosage and I didn’t feel like I needed … like, what were they gonna prescribe to me that was, I think it would make me feel like a zombie or it would make me tired or, it would just have a negative effect? So, I just felt like what I was taking was fine.

It was fine because it, it made you feel better?

So it was sort of a, gave you a sense of comfort?

And so then what happened? At some point?

I just, sat back, and kind of reflected. I mean, I was drinking a lot and that wasn’t doing much. And I started mixing them, and that worked, for a while. And then after that, I just said, “What’s the next highest drug?” You know, like, what’s the strongest, which one has the most alcohol content? And I just thought, like, “I kinda know what’s next and I know where this can go. And, it’s not safe, and I don’t wanna go down this road.” So I even, for a period of time, I stopped taking it even for, for my menstrual cramps and I just endured the pain, I just dealt with it just because I wanted to kinda clear my system out of being immune to, you know, such high-dosage medications.

Tia didn't want to get a diagnosis because depression is frowned upon for African American women, and she did not want the diagnosis in her file.

Tia didn't want to get a diagnosis because depression is frowned upon for African American women, and she did not want the diagnosis in her file.

And did your, did you get a diagnosis from your doctors, who offered you that?

Okay, you know I, I, I know that depression has, you know, it’s a sensitive topic and it’s in, it’s in some kind of parts of the culture it’s stigmatized.

Do you feel that that is a stigma?

Yeah and, and it, in your culture, particularly?

Yes, yes it’s not something that’s easy to talk about. I feel like African Americans or maybe women, I don’t know, I can’t speak for men. We deal with, you know, a lot and not having a support group makes it, or, makes it harder, ’cause we kind of have to deal with everything ourselves or you know, on our own and if I would say, “hey, I think I’m depressed,” it just, it’s something that’s kind of frowned upon or something that’s …

Frowned upon by? Like your friends, your family, your community?

I think maybe … The community. It’s not something that’s “in the norm,” I guess you would say? I don’t know, I don’t think people are educated on it much.

Tia says that after an intimate partner stole her belongings, she went back in her shell. She wonders why she was such an easy target to be preyed upon.

Tia says that after an intimate partner stole her belongings, she went back in her shell. She wonders why she was such an easy target to be preyed upon.

So, it ended really badly … abuse. He … taken things from my actual apartment when I was, when I actually had the strength to get up and go look for a job, after being depressed. And I went to a temp service, which I didn’t want to do, because then I would be around people, lots of people, but I had no choice. And, while I was at the interview, he came and kind of took everything that, you know, that I worked for, that I had, you know, so you know after that situation I was depressed, but, looking at him, maybe it’s different. But I kinda felt that I wasn’t, as bad, but then also felt horrible because it was, it’s something in me that attracted this person, there’s something that’s in me that allowed the relationship to go on so long. There’s something that I need to change. So, it was, it’s an eye opener, but, then again I’m back in my shell, because … it’s just scary.

Stigma related to depression in the Black community discouraged Tia from seeking treatment.

Stigma related to depression in the Black community discouraged Tia from seeking treatment.

Ok I think that I have felt different than a lot of my peers for almost as long as I can remember. Even in young childhood everyone was very happy and go lucky and I had this, not that I didn’t have moments of happiness but I always had this gnawing, underlying sense of sadness. there was I always had these very deep darker thoughts and when I would ask you know friends that were my age whether they had ever thought about that, the thought you know had never crossed their mind. And I found that so odd, why do I feel this way when nobody else does, nobody else has ever even had the concept of that before.