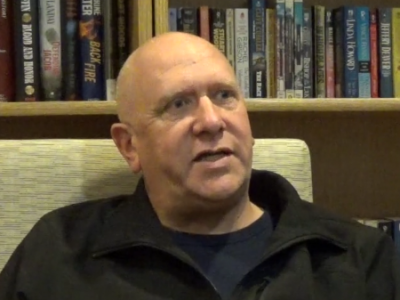 Although his wife began to notice issues after he returned from a deployment in Kosovo in 1999, it wasn’t until 2010 that Alan was officially diagnosed with a mild TBI. This was the result of a parachute accident during a routine training years before for which he had not sought or received medical treatment. In the following years he noticed issues with recall, trouble focusing, and just “not processing things as quickly, but did not know that it could be connected to his earlier injury.

Alan was conducting a routine jump during parachute training at an Air Force base in Oregon when the winds picked up causing him to hit the ground at an alarming speed. He recalls his feet hitting the ground and then his “head hitting and then going blacked out, and then the sensation of being dragged across the ground.” After the incident Alan couldn’t hear well for a week and “felt somewhat nauseated from it” and sluggish in his response to things. He didn’t seek medical treatment and over time he recovered and went on with his military career serving in Iraq in 2002 and in Louisiana for Hurricane Katrina in 2005.

Alan first realized something was wrong when his “wife noticed I was having some kind of detachment” after coming back from a deployment in Kosovo in 1999. However, he wasn’t officially diagnosed with mild TBI until doing his retirement paperwork in 2010 when, after being given a full CT scan at the VA, the scars of three previous brain bleeds were detected. He was medically retired that summer.

Alan has experienced a variety of symptoms related to his injuries. At the time of the parachute incident he had trouble hearing, was nauseated, and in pain. In the years after he has noticed issues with recall, trouble focusing, and just “not processing things as quickly.”

To those struggling with similar issues he says, “my first thing is go get medical help. I should have gone, 'hey I rung my head pretty good' and that might have expedited. Get help, at least give it a shot.”

Alan wasn’t diagnosed with TBI until his medical retirement process.

Alan wasn’t diagnosed with TBI until his medical retirement process.

So, through the process of medical retirement I’m like ok well I did break my back in 89 in a parachute jump, you know so I was going through all this stuff I had to fill out a lot of things for the VA and I’m like I was always the butt of jokes about that day at the drop zone when I got knocked out. I guess, you know, watching it was pretty funny but anyway. So, I’m like, hey, write a buddy statement, pull it, turned it in to the VA, and they’re like quick as can be, oh yeah, we wanna test, check you out, see what going on. So, they did the full CT Scan, I did this cognitive test, and they’re like we see like three bleeds on your brain, I mean they’re done, I mean they’re not bleeding anymore, they’re stabilized. And we see that you do have a deficit, you know, processing stuff. So yeah, you suffered a TBI. And that like, oh, didn’t see that one coming. So, and I was medically retired August 28, 2010.

Alan thinks his cognitive ability might have been better if he hadn’t been hit in the head so many times.

Alan thinks his cognitive ability might have been better if he hadn’t been hit in the head so many times.

I would think maybe in regards to my cognitive ability, that might have helped not getting hit upside the head like that. It’s so weird, the first part of my training, for years we would do these water jumps and the parachute would come off your head with these Capewells. I was talking about, they’re metal, and we didn’t wear plastic helmets. When we were just little kids we didn’t wear helmets to ride bikes or anything like that, but its good with our kids, we as adults. Always in the back, and I have a good size noggin and right here, it’s sore, it’s from the Capewells constantly hitting me in the back of the head. Like ow! It was a fun jump.

Alan talks about his experience with different medications.

Alan talks about his experience with different medications.

For a long time I was on Concerta, I was on Ritalin for the ADHD, and of course I’m still on a high dose of Prozac, 200 mg, I take two tablets a day. But I’m not on the other, the Ritalin. And it’s like ah I feel really focused, but it’s kind of weird, I just didn’t like that feeling. And then I haven’t taken it, I got off of it after my heart issue.

I: How long had you been on the Ritalin?

How long had I been on it? So probably from 2001 to 2006, and I would go back between Ritalin and Concerta, which is the delayed, it’s delayed you only take it once a day, and then Ritalin I would take twice a day.

I: And what was the reason that they prescribed?

Well it was, and this is through a civilian psychologist that diagnosed me with ADHD, which science or medicine isn’t…

I: What kind of symptoms did you have that sort of led her to that?

I couldn’t keep focused on stuff. You know obviously lists really help. And follow-though is still a struggle.

I: And was the Prozac sort of at that same time, were you prescribed that as well?

Yeah, well initially I did Zoloft and then I went to Prozac. But I have been very religious about taking it, and also heart medications after 2007.

I: So, did you notice a difference when you stopped taking the Ritalin, like did you miss it, and how have you coped with that or what kind of differences have you noticed first of all?

I felt less edgy. I felt like, it was almost like a little bit of withdrawals as I was parting ways with it, maybe in that regards. I have never had a substance other than alcohol; there was a time when I was drinking a lot. So, I try to just have one to two beers or a glass of wine in the evening. I don’t have that when I’m at the fire station. But I think I’ve gotten better at decreasing that.

I: So, what prompted you to want to stop with the Ritalin?

It just made me feel like not good. I didn’t feel good.

Alan worked with a counselor to develop strategies for coping with his PTSD and get himself a little better organized.

Alan worked with a counselor to develop strategies for coping with his PTSD and get himself a little better organized.

Yeah, well you know some of it through the counselor or psychologist, I did a, can’t think of the name. We wrote out what issues I had, memories and then we just kind of - God I can’t remember these, what it was called, but how to break things down. You know was it really this bad? And I thought it was very helpful, just kind of like breathing exercises. I went to a course here. You know now I think about it I did go to a course, just how to get myself a little better organized for PTSD. And that was though, I can’t remember the nice ladies name, she works at the Portland VA and she deals with…

I: What types of things did she suggest that were helpful to you?

Well you know just, the calendar, writing out the next month and, I didn’t you know you’re always trying to get it with this calendar. I was doing it with a big calendar at home and I thought that was successful.

Alan describes feeling guilt about the times he couldn’t do more to help other guys on his team.

Alan describes feeling guilt about the times he couldn’t do more to help other guys on his team.

Well, it feels. At first it feels like I could have done more, should have done more, could have done this better, so like, guilt. You know, watching somebody hit the ground, there’s nothing you can do about it. And then almost saying to yourself, god he hit right on the cement, maybe he should, he’s hurt so bad maybe we should just call it. You know, for him. It’s like oh my gosh this is, and it was pretty I mean, you didn’t know…so that type of feeling. That’s my buddy and I’m scared, you know, that feeling. Did I land my parachute close enough to him to help out, and other guys got to him first, and trying to get an airway, and I’m trying to think what are the drugs we need to give him to, so it’s just like I didn’t do enough. That was…

One night when we were flying in Iraq, I think back to a night we almost crashed. We were out looking for a helicopter that was missing and it was an army helicopter and they found it the next day. Because the weather was horrible, we lost sight of each other, two helicopters, almost hit the ground. Thank goodness for an American Airlines civilian pilot in the co-pilot seat. He’s like I’m taking over from the pilot who was in a group flying helicopters in the Army, never did instruments really, I mean knew about it but - this American Airlines guy that flew F16s and then helicopters was like, climbed out of there. Whew. That kind of haunts me back.

And then when this retirement thing happened, I was like I’m off the hook. I don’t have to go fly at night, even though I found it exciting. And I don’t have to go overseas, although I found that exciting, exhilarating. But, we almost died and there’s probably a few times that our flight, the guys in our helicopter, the flight engineers that were on com the whole time while we were getting ready, there’s time that - well we had other times where we thought you guys were on the com and you know, so…so all this pressure came off.

Alan urges other Veterans to get medical help and to remember that they did a good job and didn’t quit.

Alan urges other Veterans to get medical help and to remember that they did a good job and didn’t quit.

I don’t know. Of course, my first thing is go get medical help. I should have went, “hey I rung my head pretty good” and that might have expedited, but then again I think TBI is so big on the radar they’re like oh yeah we need to test you. So, the other thing would be get help, at least give it a shot. I’m usually a pretty patient guy so it’s easy for me to sit through something. I think what I have learned is not to, that I did a good job. And, of course, I debate that every once and a while in my head. But we all do that I guess. But I think I learned that lesson that I did a good job and I didn’t quit. I lost my security, but did it 20 years. But I wanted to keep on serving.